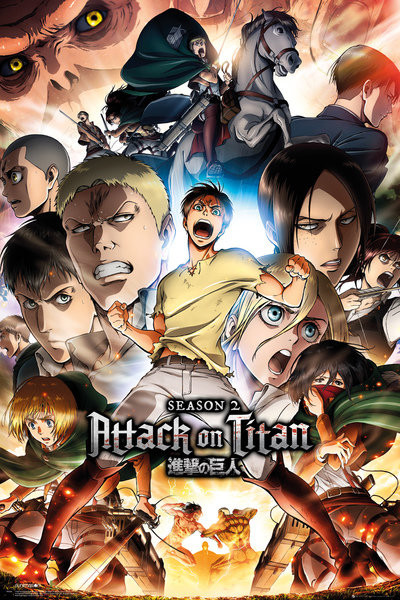 Synopsis: The season follows Eren Jaeger and his friends from the 104th Training Corps who have just begun to become full members of the Survey Corps. After fighting the Female Titan, Eren finds no time to rest as a horde of Titans is approaching Wall Rose and the battle for humanity continues.

Titans are typically several stories tall, seem to have no intelligence, devour human beings, and, worst of all, seem to do it for pleasure rather than as a food source. A small percentage of humanity survived by walling themselves in a land protected by extremely high walls, even taller than the biggest of titans. Flash forward to the present, and mankind has not seen a titan in over 100 years. One day, 10-year-old Eren and his foster sister Mikasa witness something horrific as the city walls are destroyed by a colossal titan that appears out of thin air. As the smaller titans flood the city, the two kids watch in horror as their mother is eaten alive. Titans that appeared inside Wall Rose, and Hange takes Pastor Nick along, intending to gain more information from him.  She arrives to find the entire village